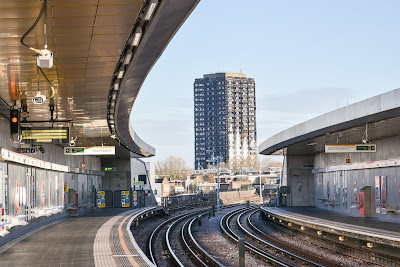 The 72 victims of Grenfell Tower Fire were murdered, victims of the violence of neglect.  Here is the proof.

A year ago, a fire started on the fourth floor of Grenfell Tower, due to a faulty appliance.  The fire spread quickly up the side of the building because the tower had been refurbished in 2016.  Flammable cladding had been added to the exterior building as part of an £8 million refit which appears to have primarily made the tower more cosmetically pleasing.  The money was not spent on improving fire safety within the building, it would appear, a cause for concern for residents’ groups for years. The initial cladding that was to be used is not illegal in the UK but its use is restricted in other countries.  To save costs a cheaper version was eventually attached to the building, a more flammable version.

Once the fire caught, residents were advised to stay in their flats.  In 99% of all cases this is the best advice, because flats are designed to be “fire resistant boxes” surrounded by the fire-resistant block itself.  Tragically, due to the cladding, this was the wrong advice.  The flammable centre of the cladding, plus the gaps between the cladding and the wall acting effectively as a flue drawing up air behind the cladding, causing the fire to shoot rapidly up the sides of the building with a speed many described as totally unexpected and unprecedented.

During the fire 72 people died, including a number of young people and children.  The flats were mostly occupied by the poorer members of Kensington Borough, one of the wealthiest places in the world.  Immediately after the fire, Theresa May was slow to respond and reluctant to go to the scene of the disaster because the anger against her and the government as palpable.  This did nothing but confirm a general feeling among the survivors that the government didn’t care about them because they were not rich or powerful. 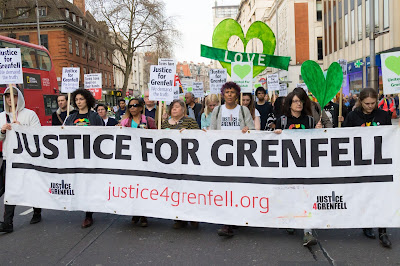 The rehousing of the 250 plus residents made homeless by the fire was a fiasco.  Although the borough is full of unoccupied property, the council struggled to find the resources to rehouse residents, some of which we sent out of the city, some hundreds of miles away. Even now, a year later, many residents have not been permanently rehoused.  Meanwhile over a hundred other tower block are clad in the same cladding as Grenfell.  Nothing as yet has been done to deal with this issue.  The costs are astronomical.  If you took out a mortgage on one of these flats, you are now in severe negative equity.  Lives of ordinary people have effectively been ruined around the country.  Some have also expressed the psychological impact of living in buildings where they know they and their children are not safe.

After the fire the anger of the residents was palpable.  They stormed the offices of the local council.  Speaking to the media they explained their battle to have their concerns heard by the developers and council about fire safety.  They had a clear sense that their lives were seen as worth less than the financial benefits of development and the financial burdens of improving safety.  Around the country many spoke out about the belief that the victims of Grenfell were victims not of fire, but of neglect, exclusion and poverty.  Speaking of the greed and dismissive nature of the planners and council members alike, it was not uncommon to hear the accusation “murderers!” Understandable in the circumstances; emotions were running high.

But if the residents of Grenfell were victims, victims of neglect and disregard for the value of their lives and those of their family, can this neglect be seen as a form of violence directed against them?  Isn’t it going too far to suggest the 72 dead were murdered by cost-cutting and profiteering?  I don’t think so.

In 1976 the French philosopher Michel Foucault gave a celebrated lecture where he outlined a new theory of state power.  Instead of a state ruling though threats to life, he argued, modern states ruled by making promises about life.  If ancient sovereign power made death or let live, modern biopower, as he called it, made life or let die.

At the same time as presenting a new theory of power, Foucault also effectively invented a new idea of violence.  If a state’s role is to protect the lives of its citizens, and to enhance and prolong them, then any state that fails in this duty, is committing an act of violence, the violence of exclusion and neglect, the violence of letting die.  He went as far as to call the neglect of life on the part of the state a form of murder.

His reasoning was devastatingly simple. If the modern state extends its power over its citizens by the promise of valuing their lives, through protection against violence, longevity due to health care and risk assessment-based legislation, if it regulates and surveills its citizens with the argument that it is for their protection, then it has entered into a social contract with them, with you.  The state basically argues I will take from rights, and cash, and privacy, and power, in return for the promise of protection of your life, and enhancement of your living.  This is certainly the promise of social housing in the capital.

If then the state’s job is to make life, to make your life safe and worth living right up until your dying breath, then when it lets you die, here through short-term profit and the disregard of the voices of the poor, then it has, by definition, killed you.  Not through direct action, as used to be the case centuries ago when despots and torturers ruled the land, but through indirect inaction.  Letting someone die, when you have a moral and legal responsibility to keep them alive, is already a form of manslaughter.  So it is far from outlandish to suggest that Grenfell was murder? 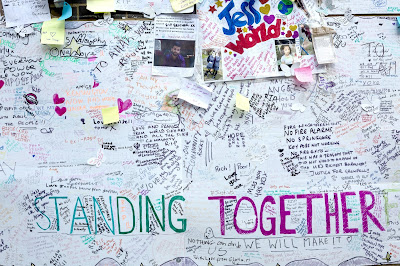 A year after Grenfell, while many commentators speak of the neglect of the victims and the survivors, few would agree with many of the survivors that the 72 dead murdered, perhaps viewing this as overly emotive, too extreme.  Yet on Foucault’s terms the violence of exclusion and neglect on the part of a state whose power is based on the promise of protection and enhancement of the life of its citizens resulted in precisely that: the murder of neglect.

But if this is so, what purpose is served by calling Grenfell murder, rather than an unfortunate accident?  Naturally one outcome is prosecution, but no one is going to be prosecuted for murder, or even manslaughter it would seem.

Why does it matter that we call it murder rather than manslaughter?  Because murder implies intent.  Did the developers and council intend to kill the residents?  No but that is not how the logic of what Foucault calls biopower works.  The intent of a biopolitical state is the intent to make live, so the active disregard of that intent is, logically, the intent of no intention to protect.  This then is murder.
Calling it murder also makes the political point more powerfully.  The wealthy of London town, and the cronyism that serves and supports them, is aggressively at the expense of the ability of poor people to be able to live normal, safe lives. They are increasingly forced into substandard rented accommodation that, due to lack of real regulation, is often dangerous.  Or made to live in tower blocks which then have to be beautified by cladding to enhance the views of the mansion that overlook them.   Leading to the lethal, cheaper cladding option, to maximise profit.

The money that should have been spent on vouchsafing the lives of the residents od Grenfell, was instead spent adding value to the property and to the area.  Money that could be used to make live, was instead squandered and the result was 72 people we left to die, were let die.  This is the murder of neglect.

Grenfell needs to be a turning point in how the poor are housed in this country. But evidence shows that already lessons learnt are being ignored, those who are culpable are being protected, ex-residents are not being looked after and meanwhile over a hundred tinder boxes containing tens of thousands of ordinary souls, are just waiting for the next spark to set them off.  So yes, accusations of murder were initially emotions boiling over, but on sober reflection, with just a little bit of help from one of the world’s most respected thinkers, one year later, it would appear they had a point.  The murder of neglect is an invisible crime, most of the time.  But Grenfell brought out into the open, and each of those tower blocks around the land dressed with equity-enhancing but life-threatening cladding, is just one more crime-scene waiting to happen.