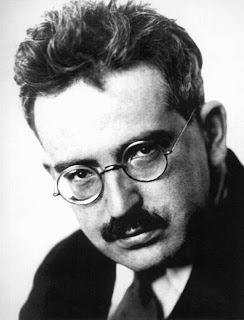 In the opening to Jean-Michel Rabate's recent book Given, he presents the history of aesthetics through considerations of aura, trace and neuter. I will leave to one side whether the neuter is a third aesthetic category or a development of the trace in face of the fading of the aura.

In presenting the aura and the trace in this manner, Rabate at one point he cites the perfect dialectic of aesthetics unearthed in Benjamin's Arcades project as located between the trace and the aura. It goes as follows:
'The trace is an appearance of nearness, however far removed the thing that is left behind may be. The aura is the appearance of a distance, however close the thing that it calls forth. In the trace, we gain possession of the thing; in the aura, it takes possession of us.' (Cited in Given 21).

The apotropaicism of this comment goes to the very heart of the aesthetic as such which is always in our culture presented as a dialectic and certainly since Hegel a dialectic posed between materiality, trace, and ideality, aura.

The work of art itself is something apotropaic or problematic as Derrida calls it in Aporias (from the Greek problema to project and project). One could the perhaps pose the problem as the dialectical other to apotropaicism. If apotropaicism attracts and repels in equal measure, a protection against an evil which appeals otherwise why does one need an active prophylaxis, then the problem both defends one against this threat and yet also projects or promotes one into its sphere of dire influence.

Of course at this stage it becomes impossible to resist the evil influence of perhaps the most nefarious of all dialectics, that between object and subject. The aesthetic object is fundementally apotropaic in that it tries to take command of one. In contrast the aesthetic subject is problematic as it resists apotropaic objectivism by its trespass into the object of its own exterior relations and for that matter interiorised alterity. Again, returning to Derrida, he seems to combine the two terms into his translation of prosthesis, as we all know essential to artistic techne, which he contends means both before and towards a place.

The aesthetic therefore consists first of apotropaicism which might be termed an aesthetic classicism: the demands of the external world on the subjective. This world is both presentative and re-presentative, indicated by the dual dynamic of apotropaicism which attracts, here I am, and repels, in other words repeats (here I mean representation literally as simply presented again in the very first instance of presentation, pushed away by repetition precisely as one comes before its presence for the first time).

Then there is a period of aesthetic modernism of which Kant and Hegel are the fathers. Here the subjective element of the problem overtakes the demands of the object. The subject wishes to protect itself from the very element its art must project into: the world at large, transcendental truths, death, and sensuousness as such. It would be easy to say projection is protection, a pushing forward and away, but this would be false. Protection is rather a projection. The art work is cast forward into the avant-garde as much to protect the subject as to liberate the aesthetic into a futural moment. If apotropaic classic object aesthetics attracts so as to reveal the repellant law of presentation without presence, then problematic modern aesthetics projects endlessly into novelty and the future to protect the subject from its own difference from itself, which is in fact difference from difference as such. Subject as ever the same as itself but never in anyway trascendentally self-identical.

It is all too easy to present the aesthetic as a historically orientated dialectic naming names and epochs in support but when I speak of the two moments of the aesthetic I do not see them has historical at all or indeed temporal in anything but a necessarily attenuated form of language that we seem to demand to be temporal, before, after and so on, when it merely uses temporal terms to convey a certain set of non-temporal and non-spatial positions and relations.

What I contend is that the aesthetic thus far in the west is first object-apotropaic, then subject-problematic and then a rather complex, baroque even decadent dialectical interpositioning of the two. Thus finally in all aesthetics one has a suspensive moment wherein the dialectic of the aesthetic: apotropaic objectivism vs. problematic subjectivism is first revealed as a doubled doubling. Rather than sublation one might cringe at the hideous appositeness of the term doublation, for that is indeed what the aesthetic performs.

The object, I argued, both attracts and repels, the problem both protects and projects. Here the term prosthesis is useful in that the aesthetic both takes us towards a place and yet inculcates us in a temporality of previousness. We head towards a place we have already proceeded from. Naturally this is echoed in Derridean differance and many other versions of this ontological temporality, see Badiou's theory of the event, Deleuze on difference and repetition and so on, but in a differentiation of self-differing diffentiations.

The object orientation of the work of art differs from itself in that it exists only to be repelled by subjects and in so doing comes to its self-indentity. This identity is not simply something that differs from itself, the age-old Eleatic problem of the one and its others. It differs from itself by resembling that from which it is fundamentally different. This is the problematic subject which again exists as such only by trespass into an exterior, transcendental materiality into whose radical and endless difference it projects itself to protect itself from the revelation of its own non-identical identity and presence-less present. The subject of enunciation in other words.

It would seem therefore there are a number of para-parallel levels of identifying differentiation in play here.