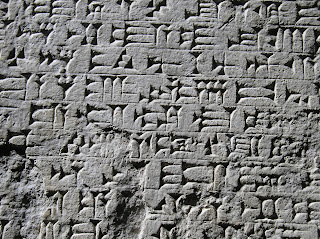 If we are to take language and/or writing as the essence of truth whether this be language as such (Agamben), as writing (Derrida), house of being (Heidegger) or as logical form of propositions (analytical philosophy) then why not do so in full?
Rather than positing elements of language in contestation, is not truth-being the totality of language including those elements that we can easily observe in language that are not necessarily taken up by philosophy.
If this is the case the first work would be a taxonomy of the qualities of what we call language, the second a reconciliation of contradications and oppositions, the third a full presentation of what truth is: language in its entirety.
Language List:
Structural Linguistics
Continental Philosophy
Generative Grammar
Analytical Philosophy
Logopoiesis

Structural Language is a system of signs used by a community to approach a commonality of meaning. These signs are used, it is said, to encode information by pairing sound with concept, and decoding information by conventional agreement as to which concepts these sounds signify. The link between sound and sense is arbitrary, but the means by which signs generate meanings is not. This system is dependant on presuppositions as regards symbolisation, pre-existence of intended meanings, common sense shared meanings, the difference between siginifier and signified, differential systems, and identical meanings. Central elements
Continental Philosophy: Three positions. Heidegger, language is the house of being. Derrida language is writing. Agamben, language is immediate mediating support.
Heidegger's placement of Being within the habitude of language is a central moment of concession that the modalities of language recommend it to Being. I see this in two ways. First the paradox of Being can only be accessed through language. Second that certain elements of language highlighted in poetry share a commonality with Being. Language can express Being to a degree because language operates in a fashion similar to Being.
Derrida's work adds to structuralism the following critiques. The presupposition of meaning or voice before mediation in material means is false. Meaning does not precede language but is always already inscribed in language. Elements of language which are essential such as trace, deferral, differentiation, and spacing mean that all language is ostensibly writing. The symbolisation theory retrospectively infects backwards the presupposition of a direct meaning. Finally the model of freedom within confines for Derrida undermines confines resulting in destructurisation.
Agamben retains the Heideggerian and Derridean point that Being is only presentable in language. Yet he also proposes that language is not bifurcated between Being and poetry or phonology and grammatology, but that language is the immediate mediation of all categorisations. Language is the place wherein such categories come into conflict in the first instance.
All three thinkers retain and element of poetic alterity. In each case it is language's singular non-identity that gives it the modality of the presentation of 'meaning'.
The presupposition that meaning precedes language is undermined by Derrida and others by revealing that meaning is essentially a construct of language use. This is particularly dependant on the differential elements of trace and deferral. Thus all meaning is always already inscribed within language and hence all language is to be termed writing. Aside from difference, trace and deferral, other qualities of language as writing would have to be taken into consideration such as materiality (semiosis), transmissibility and prophylaxis. Naturallt here therefore language is not the transmission of information but the construction of conceptualisations of meaning. There is not active process of encoding and decoding as all is already code.
Language as such: Here Agamben and others propose a pre-writing element to language which is pure Voice. Here the division between phonological and grammatological versions of language is put to one side with language presented as the pure medium of support for meaning. In this model meaning does not precede language, nor writing precede voice as pure self-presence, but voice and writing come together by virtue of the medium of language as such.
Deep Structure: For Chomsky and others language is a cognitive procedure. It consisted intitiall of two elements, surface and deep structure. Surface structure's vary but all are reducible to deep structures common to all languages. Language is not learnt therefore but is hardwired and projects from this core the language variations. This has since been abandoned in favour of the minimalist program. What this indicates is the core ideas at the heart of all contemporary theories of grammar.
Here language is defined in terms of syntax rather than sign and in terms of transformative derivations rather than symbol.

These sustained positions on language do not constitute language in its totality and thus a final element of language, a logopoietic element, must be added into the mix.