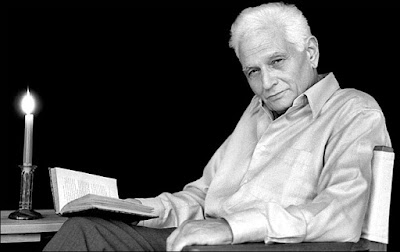 If Derrida were alive now, in his thirties, faced with the massive presence of the dead Derrida's ouevre, how else would he read him than in a "deconstructive" fashion?

The only respectful way to read Derrida is to read against the grain of his texts. Anything else is mere hagiography.

Badiou's criticisms of Derrida are, as are all such criticisms, poorly judged based on a representation of his work which is simplistic and misleading. Yet his criticism of the reliance of post-Heideggerian philosophers on a certain rhetoric of late Romantic defeat and melancholy is a point well made.

Not that Derrida cannot also be a funny and affirmative philosopher, but there is an over-reliance on the derelict topographies of melancholia and loss. Spectres, prosopopeia and the like are extremely attractive tropes in Derrida's work but perhaps Badiou is right and they suck him into a Romantic discourse of ending and remnants which disallows a reading of him in an affirmative mode.

For me there must be two simultaneous readings of Derrida.

The first is a meta-philosophical reading. Derrida the philosopher of the trace. A reduction of Derridean singularities to a singular contribution to the theory of the trace as a mobile space-time nexus as Sean Gaston describes it.

The second is quite the opposite, a lapidary, occasional, singular Derrida where one reads the moments of his work as moments, without ever succumbing to summary and generalisation. The Derrida of poetry, the Derrida of lines, numerical Derrida, Derrida and animals.

Thus my reading of Derrida will be a set based on only one multiple, and at the same time a set which includes all multiples.

Derrida must be read as a proper name. As both singular, and as multiple, one and the many.

Negotiating a reading of Derrida against the grain, undermining Romantic rhetoric, that exists in the paradox of the proper name as both singular (Derrida of the trace) and multiple (the encyclopedic Derrida) strikes me as the only post-Derridean way to read Derrida that is neither ridiculously dismissive (Badiou, Agamben, Habermas) or mere hagiographic commentary.

Minotauromachia said…
I really loved Derrida's "Glas". That's where you'll see the extent of his intelligence and creativity.
13 July 2009 at 07:22

Unknown said…
My reading of Derrida is similar to Sean Gaston, while having those profound archeological clicks of rhetorical epiphany. It seems to be inbetween obscure Kafkaesque methodology and obtrusive ramblings that leaves the aftertaste of winged journaling.