The Crisis in Capital Cruelty: How Europe is Slowly Banning the American Death Penality 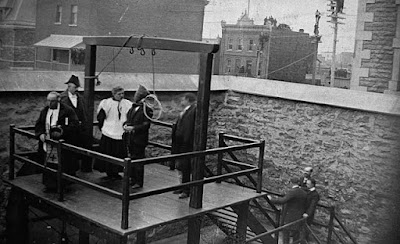 When I was a child we used to play a gruesome game. Of a weekend you would often find me, my siblings and the occasional honoured guest, lined up on the wall of our back garden. Whoever was ‘It’ would go down the line and ask, in a tone hardened with menace, ‘What do you want to be killed by?’ Each child would choose a method of execution and the executioner would shoulder a rifle, fling some daggers, jazz up a flamethrower or what have you, ‘killing’ the person in question. The convicted would then dramatically perform their death with all the ham and trimmings they could muster. The winner was the best die-er.

I was particularly good at this game. I could really throw myself into a poisoning. If you tried to stab me, you had a West Side Story jazz-fight on your hands, before the inevitable up-to-the-hilt in my gut and down I would go. The elegance of my firing squad, almost Beckettian in its reduced action, was deemed powerful and intense. Boy could I writhe on our small, sparse lawn. Man would I moan, as the noose was draped about my neck. I died countless times in innumerable different ways as I grew up and eventually out of the game, yet never once did I, or any of my fellow delinquents, request the lethal injection.

Clearly, an impassively administered injection did not appeal to our sense of drama. Given free rein across the full menu of annihilation, why would I want to act out the lethal injection? You just lie down in a room smelling of chemicals, and they pump a few drugs into you. Where’s the fun in that?
The banality of death by lethal injection which disallows it from tasteless child’s play, at the same time recommends it as the primary mode of state-sponsored murder in the US. The almost asymbolic nature of the injection is an important by-product of the method’s supposed humanity and efficiency. States want us to think it a pretty mundane task to eliminate the most ‘dangerous’ of our citizens; a run-of-the-mill medical procedure, like having your braces tightened or your ears syringed.

In avoiding the death injection as a child for all these reasons, in retrospect I realise I was missing a trick. For it turns out that lethal injections are not so ‘ho-hum’ after all. That they are regularly botched, with gruesome consequences, is something I could have done a lot with back then. Indeed the difficulty of killing someone through the injection of a compound of drugs such as pentobarbital and potassium chloride, has become so pronounced that, as I write this, the whole practice has been suspended across the majority of states in the US that had previously used the injection as their main mode of execution.