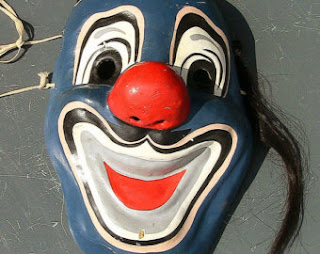 The recent scary clown mask craze has a retro-whiff about it.  Rather than people being hounded by trolls on the information super-highway, they are being menaced by clowns on the streets of their neighbourhood.


Although an ancient art, clowning has a great deal in common with trolling in particular the use of the mask.  All clowns put on a mask, of course, as a method of distancing themselves from their day to day personality, and also as a licence to behave on the edges of acceptability.


Trolling too is a form of mask-making.  While it is hard to define precisely what trolling is, my millennial students reliably inform me it is not so much bullying on line as taking on an exaggerated persona to get the most effect: being excessively insulted by something, being overly violent in your online responses, taking up exaggerated positions on topics and so on.  When you toll someone you use the anonymity of digital masking to create a mask for yourself that is more impactful, violent and share-friendly.


Indeed both trolls and clowns share in the use of the mask to distance themselves, from their real selves, and to also distance themselves from their effect on others.  But more than this trolling and clowning share a symbiotic i-relationship.  The recent proposed Clowns Lives Matter March was organised through, what else, social media.  Facebook and Twitter have been sources for organising attacks and sharing imagery inciting further attacks.


So it would appear that clowning adds a new physicality to online bullying.  While trolling can have tangible real-world effects in extreme cases, mostly the cost is virtual.  With clowning the disaffected of the world are closing their laptops, coming out of their bedrooms and taking back the streets.


It was only a matter of time before the currency of the web, likes and shares, until recently the crack cocaine of contemporary social life, would lose its edge.  In the run up to Halloween there is a new drug in town, dopamine, the fight or flight drug that you can only score on the street when you are mask to face with your victim.


Does this mark a decline in virtual violence, as I said a retro-shift back to a kind of Clockwork Orange world of ultra-violence?  Or does it draw a new frontier where the social drug of sharing is cut with the brain-drug of scaring to produce a new high for bullies around the globe? Whatever the answer it is clear, as Victor Hugo once said, “Virtue has a veil, vice a mask”.