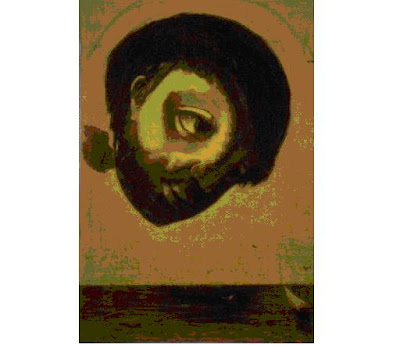 Ferreting
I would like to conclude by reconsidering some of my earlier comments in reference to representations of the gaze in light of this reformulation of the scopic through visual metonymy, the role of decollation or the arrest in forming the gaze, and the position of a gestural subjectivity. To do this let’s look at one more image by Redon.
This image is as comforting as Moreau’s “L’apparition” is unnerving and for similar reasons as both are uncanny representations of what it means to be the object of enunciation within the scopic field. This benevolent, cartoon-like, all seeing, winged, gaze floats in the infinite zone of otherness gazing upon the tiny boat below in a powerful gesture of the role of the gaze in structuring the otherwise dangerously aleatory nature of our journey through being. Here, there is no gore to indicate the violence of the decollative gesture; rather we are in the post-gaze zone where the mutilated object has become the separated object a, which is itself the arrest of the gesture of the metonymical.


Metonymy’s gesturality is based on placing one thing so that it is “to hand” and can be touched by its other. In this it resembles a head recently separated from the body retains some vestiges of the spinal column and the like as a visceral archive to once existent connection. In Redon’s image, in contrast, it is as if the gaze had always been. There is no hint of the decollative violence that got us to this point of rest.

This is the real myth of the gaze that makes it both opaque and transparent. In it’s ability to see all it applies a metaphysical transparency and translucent film onto the world of our being, yet in its mythical otherness and precursiveness it remain permanently opaque and occluded from sight and from the eye.


As opposed to Katz’s painting where desire is elided through the removal of the subject/object in favour of the interpersonal “you,” in these much earlier images the combination of the revealed and the hidden is still very much there for all to see. Desire comes before the scopic in its imposition of a misogynistic economy of lack, but its metonymy alone, which has little or nothing to do with the realm of the real thing, requires the scopic to finish off its totally determinant system. Scopic metonymy brings the real into the repetitious structure of the code of desire in language so as to somaticise it. This is a risk for desire, in that it takes it away from the subject but it is necessary, for the object that it takes from the subject, so as to be the alterior zone which vouchsafes desire, is desire itself.


Desire is the subject’s thing. Without the gaze there is no sense of what a pre-cursive lack of lack could be, and without the pre-cursor there can be no return of the logos resulting in the subjective plenitude that the subject longs for. The gaze, then, makes desire into the object of desire, which is the chiasmatic and self-fulfilling endless economic exchange of the system. However, whilst Redon’s image suggests this is a good thing, the violence inherent in Moreau’s work, coupled with the problem of gender keep slipping into the system like Lacan’s ferret, and this is why the gaze is not only a site for imposition and appropriation, but also of freedom and revolution.


The body is a gesture in the scopic, the precursor to the event of its gendered being-in-desire depending on the nature of the cutting off of its energies, but the cutting off of the event of being is predicated on such an event, just as the masculine position of meta-gazing is predicated on first opening up another place. It is through this space opened up by metonymy that not only desire slip by, but also a sense of freedom from desire.


Returning to Lacan’s original formulation of the metonymic formula we saw there that metonymy provided the subject with the permission of elision and allowed for the resistance of signification. These two qualities in terms of desire alone, away from scopic metonymy, could be taken negatively to be the two central elements of the all controlling system of socialisation that every individual goes through in order to be a subject. Elision dictates that the subject always lacks being and so is caught up in an endless attempt to catch the ferret of desire by the tail. At the same time, signification’s resistance, constituted in its refusal to allow the subject to cross the bar so as to get to s (the truth of the subject’s real desires), guarantees that the subject never ceases to chase this ferret. Thus, the subject takes up its want-to-be as its permanent being.


However, Lacanian mastery is always matched by Lacanian subversion, indicated by his twin interests in Hegel and surrealism. This is the importance of scopic metonymy and also perhaps why it is in the images of the artistic avant-garde of symbolism and the New York School that scopic metonymy is best considered. The permission for elision in the scopic allows the subject to become a speck, and, in doing so, to spend some time as an object. This negation of subjective importance though the anamorphosis of the screen opens up both a possible escape route for the would-be revolutionary subject, while giving the subject a proper ethical relationship with the other qua other.

In addition, the resistance of signification not only stops the subject getting to the real thing; it undermines the pretensions of the arts to be able to represent the real as well. Starting with symbolism and coming through various avant-garde groupings right up to the New York School, we find that scopic metonymy’s relationship with the resistance of signification is a central part of the avant-garde project of last 150 years to redefine the object of art and the subject of the artist.


With all this in mind, it can be asserted that it is in the moment of finishing desire off through scopic metonymy that otherness and alterity can slip by like ferrets. If they are able to do so then, in the future, this might really bring an end to desire as a discourse in favour of some other system of intersubjective, economic exchange which would not only radicalise out conceptions of the subject and desire in years to come, but also all the artistic means to hand capable of taking on such a system. If this were to come to pass then the subject and the work of art would go hand in hand, chasing the ferret of desire not so as to capture it and put it in a cage, but as an excuse to escape the cage of their own desire and move into a whole new realm of possible subjective experience.