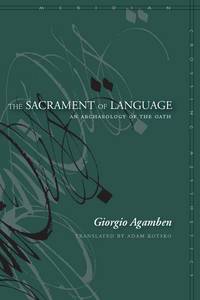 Opening of the final chapter of my book Agamben and Indifference dealing with language in The Sacrament of Language.

One of the earliest pieces of important Agamben criticism, Düttman’s introduction to Idea of Prose, attempts to delineate the key element of language for Agamben’s thought: communicability. Düttman concentrates on the Benjamin source for the term, specifically the idea that communicability communicates nothing other than language’s capacity to communicate.  It does this only through its praxis or act, its contingency, context, operativity and intelligibility.   Yet, at no point can language communicate its communicability it can only demonstrate it through its being a communicable medium or process.  This relates to Agamben’s interest in the Russell-Frege paradox of statement self-predication although as we shall see an important element of communicability is that it concerns compound linguistic series, not individual words.  Perhaps at this stage we should progress through an admission of failure. In my own extended comments on communicability in my earlier work, while I approached this quality and delineated some of its aspects, I did not arrive at a state of clarity in terms of its definition.  I am certainly to blame for this lack of clarity and so many other dark obfuscations.  Having said that with the publication of The Sacrament of Language, The Kingdom and the Glory and The Signature of All Things it is now increasingly impossible not to be clear over what Agamben takes to be language’s primary characteristic: its communicability defined in terms of its intelligibility or its operativity.  It has been a long road for many of us to this refuge point, itself only the gate to a whole new territory for which we remain woefully ill-equipped and with little to guide us beyond sketches on the backs of match-books, outlandish stories from the mouths of the mad, that sort of thing.
Tags: philosophy of language, Agamben, Sacrament of Language, Communicability